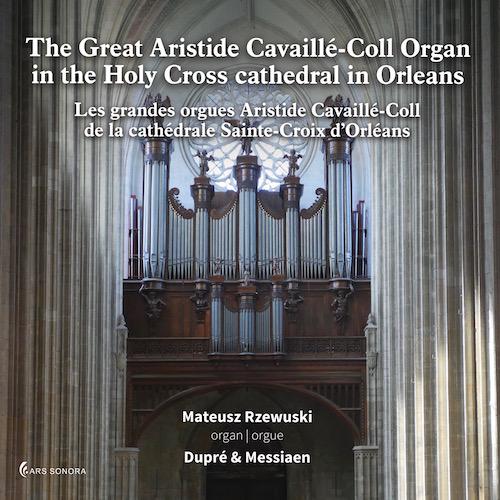 https://www.organroxx.com/shop/product/the-great-aristide-cavaille-coll-organ-in-the-holy-cross-cathedral-in-orleans-1925
At the moment no shipping due to covid-19!

The presented CD is the debut record by polish organist Mateusz Rzewuski, recorded after his studies in Paris and doctoral dissertation about French organ music of the 19th and 20th centuries. On the CD, there are two great cycles: Symphonie-Passion op.23 by Marcel Dupré and L’Ascension by Olivier Messiaen. The works were performed on the original historical organ of Aristide Cavaillé-Coll (1880) and recorded in the Holy Cross cathedral in Orleans, France.

The selection of organ works recorded on the CD is not accidental. Marcel Dupré and Olivier Messiaen are composers associated with the 19th - and 20th -century Parisian circles. The organists were strongly interconnected as Marcel Dupré was Olivier Messiaen’s organ teacher in the Paris Conservatory. Both of them composed mainly sacred organ pieces and they both held a position of the titular organist of a famous Parisian church. Both Symphonie-Passion op. 23 and L’Ascension not only cover religious themes but they also make references to particular events connected with the passion, death and resurrection of Christ. Although the two Masters originated from the same Lemmens school of organ music interpretation, their compositions still vary a lot. Each of the four-movement cycles differently depicts, with the use of musical means, crucial events from the history of salvation. This performance of the two large sacred cycles on the original Aristide Cavaillé-Coll’s organ seems, therefore, to be appropriate and justified.

We do hope that sacred organ music of the 19th and 20th centuries, represented by works of the French composers Marcel Dupré and Olivier Messiaen, will help you experience something unique and let you enter the world of Gothic cathedrals and excellent organ of Aristide Cavaillé-Coll.